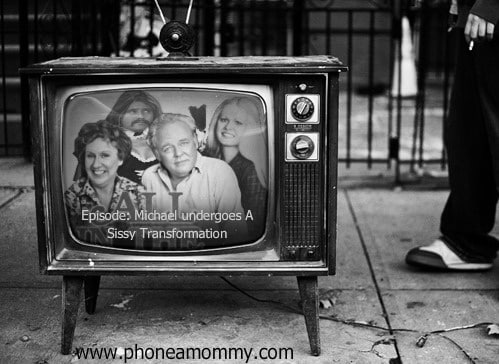 We left off last week with Gloria being very excited to dress Michael as a Sissy. Michael wasn’t all too happy to see what lay before him.

Chapter 2: The Transformation to Sissy

Come on Michael,” Gloria pleads with Michael, “honey do it for me?  “Please, Michael!” Gloria looks at him with sourpuss face and starts to whine; her bottom lip begins to quiver knowing Michael will for sure give in.  Still hesitant but wanting to make Gloria happy, Michael agrees.

Gloria assist in dressing him, first having him lie on the bed to get diapered. Michael starts to fuss again “Gloria is this really necessary? I mean I am all for having an open sexual dialog honey, you know I am very liberal in my views, but a Diaper, Really?” Firmly she proceeds to diaper him, “yes, Michael, it is most necessary, you will soon understand why, just trust me.”

Still unsure, but deciding it is easy just to go along rather then argue he lifts his bottom in order to be diapered, feeling a bit aroused as she rubs on the baby lotion and sprinkles the baby powered over his genitals. Next she slips on a silky pair of full panties up and over the thick bulky diaper, and then carefully she pulls the silk high thigh hose over his legs. She eagerly slips on the half-inch heel, then ask him to sit up on the bed. As she begins to put on his garter and training bra Michael cannot help but to feel how comfy the thick bulky adult diaper feels on him. He starts to bounce on the bed and wiggle his bottom to and fro.

“Hey, Gloria?” he says sheepishly, “Yes, Mike?” “ I think I understand the need for the diaper, oh wow, it is making me feel very vulnerable and somewhat submissive, I think I like the feel,” he says with his crocked smile. He places his hands on his legs rubbing his hands back and forth over them delighted at the pleasure is brought him. Gloria meanwhile had slipped the maids dress over his head and began to fidget with his wig adjusting it just right Gloria begins to brush his long blonde hair, and at the very moment the brush pulled through his golden strands and over the silky dress he could feel a tingly sensation down into his groin.

Oh, Michael!” she said with such enthusiasm “Yes, Gloria?” Looking up at her anxious to hear what she thought, “You look simply ….well like a Sissy!” Feeling rather giddy, Michael walks over to the full length mirror and for a moment just stares at himself, running his hands down the silky maids uniform, a faint smile appears on his face as he dances a little in front of the mirror. “Wow, Gloria, I look……well, I don’t know I look pretty’” he says with a giggle.

Gloria has one last surprise, she hands him the duster. “Here now get to work!”

Hope you enjoyed my version of an episode I would love to have seen played out with the Bunker Family! Feel free to provide feedback or ideas of other stories you might like us to write about over on our message board. Be sure to tune in everyday for fun new fetish stories brought to you by the best ladies on the net, right here at Phone a Mommy!

(Disclaimer: I do not own nor claim any rights to the original work, the work above is “transformative” work of my own creative creation meant as a parody or twist using fictitious characters and should be considered fair use under the Copyright Act) 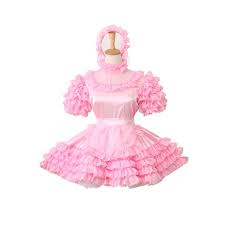