Obey your ABDL Mommy…Or Else… 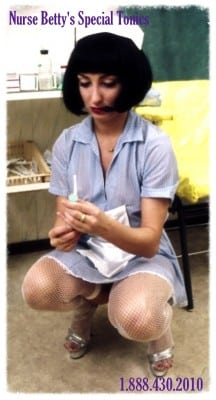 If you look in my special medicine cabinet you’ll find all sorts of tonics and treatments; with all of my experience I always know the perfect treatment for each patient. For example, when William came to see me he was an absolute mess. But after just a few moments I knew exactly what he needed, it was just a matter of how to give it to him.

Poor Willy was just a ball of stress. Troubles with work, a string of unsuccessful relationships, and an overall lack of self-confidence. I directed him to undress and put on the robe hanging on the wall, and when I returned we would begin the treatment. Well our little Willy was so consumed with stress that he barely questioned me, and when I returned he was sitting up on the examining table wearing only his robe, just as directed.

“Now this medicine is very effective, however it must be taken in a certain way, otherwise it will loose its potency,” I told him, he was so desperate for relief he agreed immediately. “Excellent, legs up in the stirrups then,”

He complied and looked down nervously as I pulled out two large suppositories and a jar of lubricant. I positioned myself between his legs and pushed up his robe. After coating the suppositories in lubricant, I used one hand to spread his cheeks and the other to reach inside his anal cavity, pushing the suppositories as far up as I could reach. William groaned and shifted around as I reached into him. I gave him a light spank on his bottom, “Come now, be a good boy Willy, lets not make this more trouble than it is,” Begrudgingly, he became more still, but I could hear him grumble that he was a grown man, not  a ‘good boy’.

“There we are, all finished. It should begin to take effect immediately…”

“I don’t feel anything,” he complained. But as soon as the words came out his face changed. “Whats going on??” he begged, “I feel funny, like tingley all over.”

He started patting his hands down his front. His arms and legs were becoming shorter and chubbier, his face getting round and sweeter looking. After just a few moments he was shrunken down to a sweet babie.

“Now you see sweet Willy, there’s nothing to be stressed about anymore…”

Come have a peek at my special medicine cabinet, perhaps the shrinking treatment is just what you need to get yourself back in a stress free and relaxed state of mind.