Willy will go home now that Mizz. Rebecca has gotten word of his misbehaving! I took little Willy over my knee, pulled off those pants, pulled out my strap-on, shoved it up his tight little asshole, fucked him with it. He cried, whined, begged, and pleaded. When I was finished fucking his little pussy ass 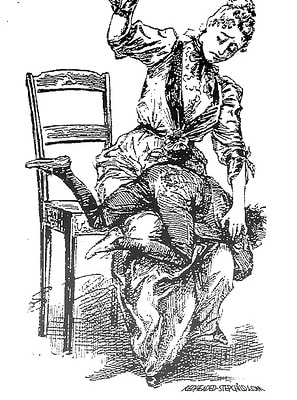 , I began to spank his buttocks with my wooden spoon. Whipping him on both cheeks, leaving red welts, and a few bruised knuckles from him trying to cover his bottom.  I let him up and looked down and began laughing hysterically, I had never seen such a pathetic looking dick in my life! Little Willy had a Little Willy, OMG this couldn’t be more funny, I couldn’t resist shouting out names such as needle dick, pencil dick, inch worm, while tears rolled down my cheeks as I laughed harder then I had in a long time. Little Willy’s face was as red as his bottom; he pulled his pants up and ran home. So next time Little Willy refuses to leave, just call me Mizz. Rebecca, I’ll take care of him for you!