Fetish Vacation Tailored for You 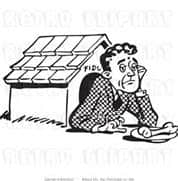 Dog houses can be used for all sorts of things its mostly used for dogs but they have other great uses also like putting someone in it when they have been very very bad.When you have someone that doesn’t listen or either lies to you or as they say just omits the truth.They seem to think they can do just whatever they choose to do but it doesn’t work that way as he soon finds out lmao.

So off we go to the dog house you want to know why he had to go there well i put fitted him in these nice cloth diapers and he kept taking them off tried sneaking around me and saying he didn’t but i caught his ass
so now he will stay in the dog house all nicely diapered up too.