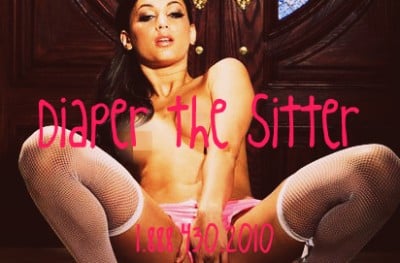 Sometimes it’s hard to get an ABy into a diaper. They can get shy and nervous and downright squirmy, making it hard to get a diaper on well. Now, as most everyone knows, usually my answer to that would be something a little physical, spanking or a little CBT to make the ABy sit still… but as it turns out, I found another way that’s almost as fun as spanking!

I was trying to get ABy Chris into his diaper for the first time when it came to me… I would let him diaper me first so he could see how easy and comfy it was, and then he’d be less worried and less squirmy! Chris agreed, partly because I think he was excited to be able to touch me under my panties (naughty boi!) but also because he was curious about what diapering was like.

I laid down on the changing mat and directed little Chris on what to do. He wiped and lotioned me (a little too thoroughly hehe) and slid the diaper under my butt before carefully powdering me lightly. I showed him how to pull the diaper up and tape the sides on nice and snug but not too tight. When he was all done I let him feel me over my diaper so he could see what it felt like when it was all done.

I told him I had to go tinkle and his eyes got wide and worried and he asked me what I was gonna do. I gave him a little smile, and told him I was going in my diaper right then! By that time he was begging me to put his diaper on him so he could go tinkle like me hehehe!